Kansai has long flourished as a center of history and culture. Surrounded by rich nature and its traditions still running deep to this day, it is the perfect area to experience Japanese traditional culture, delicious local cuisines and lush nature. Take a break from the games and explore the uniqueness of Kansai.

The very best of Kansai!
We offer a packed program for participants to enjoy Kansai to its fullest, including not only temples and shrines but also traditional culture, cuisine, and outdoor activities. Including periods before, after and between the games, enjoy this experience program exclusive to this region in 2021! 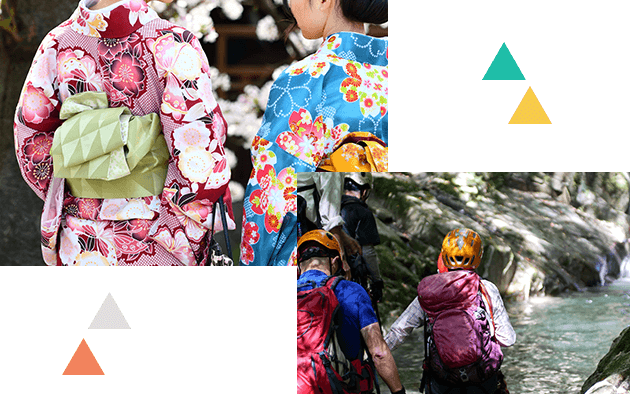 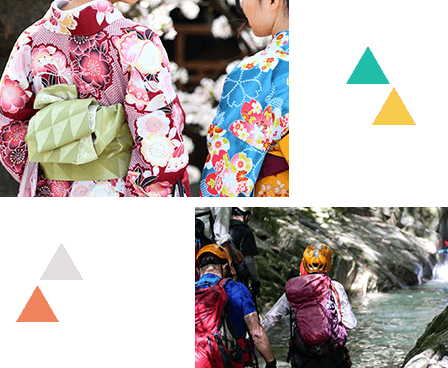 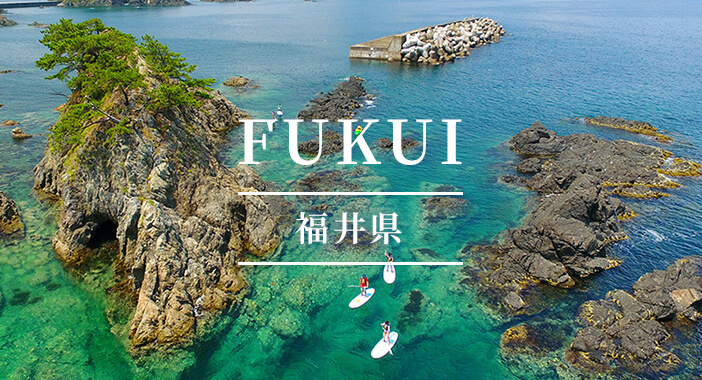 Relish the cityscapes full of history and culture
and the blessings of the brave Sea of Japan.

Fukui Prefecture is a treasure trove of food, blessed with an abundance of food from its mountains, sea, and fields, including its brand of rice known as Ichihomare, ranked A+ for its flavor for two consecutive years, and high-grade brand of Japanese pufferfish, the king of pufferfish, known as Wakasafugu.
Furthermore, it has numerous places where you can experience ageless historical and cultural attractions, including the world’s largest dinosaur museum and Eihei-ji Temple, one of the main temples of the Soto school of Zen Buddhism.
We encourage you to visit Fukui Prefecture and enjoy everything it has to offer. 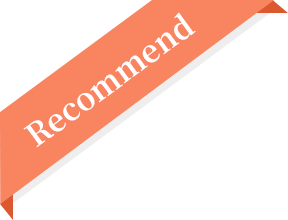 The Japanese pufferfish from Wakasa Port are eaten under the brand name Wakasafugu and are characterized by a tender texture caused by temperature differences and rough waves in the Sea of Japan causing them to expand and tighten often.
There are beach cafes along Wakasa Wada Beach that serve delicious Wakasafugu Tempura and Carpaccio even in summer with that same texture. 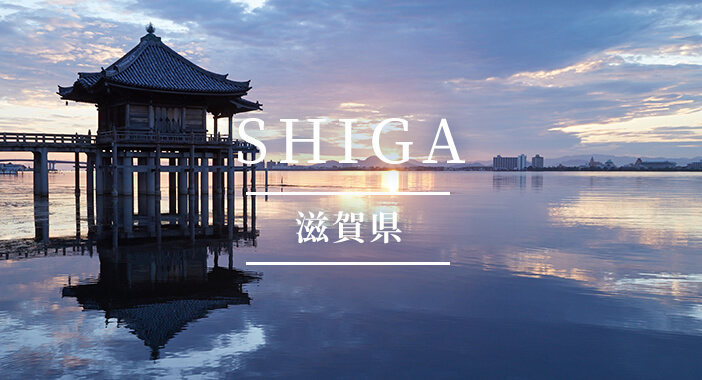 A breather amongst rich nature and ageless historyShiga / Lake Biwa

Omi beef is one of Japan’s best three kinds of Japanese beef. With its fine, soft fleshiness and high degree of marbling, you will never forget the melting deliciousness once you put it in your mouth.

Where can you eat them?
Can be found in Japanese pubs, restaurants, and hotels in all regions in the prefecture 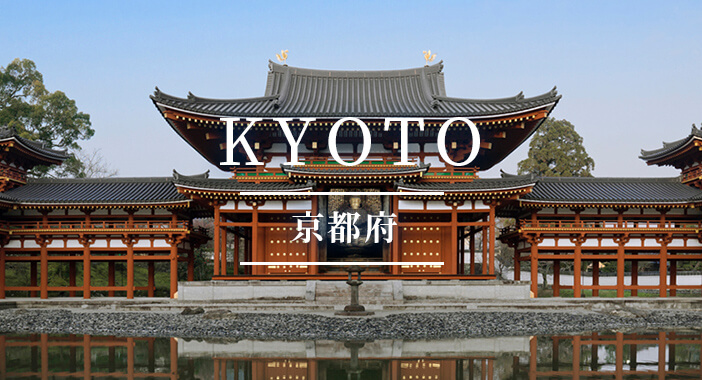 Kyoto, one of Japan’s ancient capitals, has kept alive its history and traditions.
Throw yourself into beautiful nature and good old-fashioned culture,
and feel the true spirit of Japan. 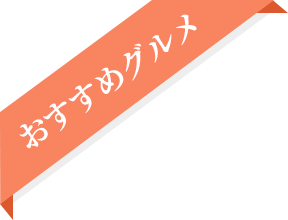 Tango Barazushi, a unique local cuisine only available in Kyoto’s Tango region, is characterized by its topping of salty-sweet, boiled minced mackerel.
It comes served in a shallow wooden box and is truly a work of art among barazushi as it is as nice to look at as it is delicious. 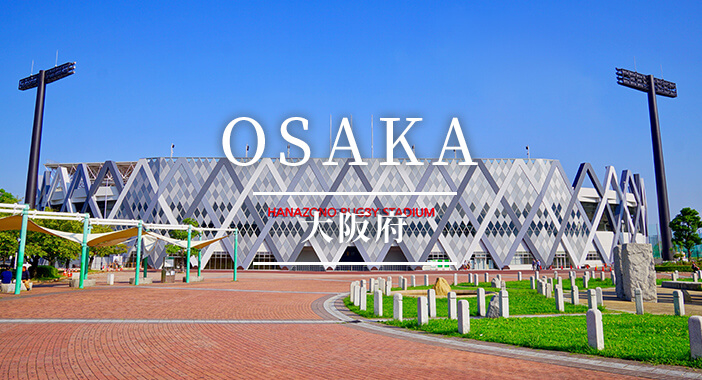 Not just for fun.
This is the real Osaka.
It’s time to experience everything Osaka has to offer!

Osaka is the economic center of western Japan and a domestic and international gateway with Kansai International Airport, Osaka International Airport and the Port of Osaka.
Known as the “water capital” due to its surrounding rivers, Osaka’s economy and culture developed thanks to its waterways. Osaka is also known as an epicurean city, its okonomiyaki, takoyaki, deep-fried skewers, and udon noodles are highly recommended.

Shrimp, fish fillet and rice seasoned with vinegar is placed into a wooden box, pressed, then taken out and cut into bite-sized pieces.

Where can you eat them?
■The Nation’s Kitchen［OSAKA-INFO］
https://osaka-info.jp/en/page/gastronomy-top
■TASTE OSAKA（A search engine for restaurants with foreign language menus.）
https://taste-osaka.com/index.php?lang=en 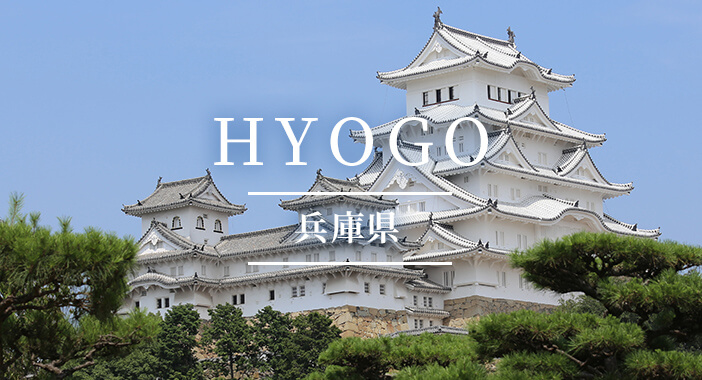 Hyogo Prefecture, the province of great castles.
A tour of 22 castles designated as national historic sites, the most of any Japanese prefecture.

Facing the Sea of Japan in the north and the Seto Inland Sea in the south, Hyogo Prefecture is a region that has everything. From cityscapes to beautiful nature, it is sometimes referred to as “miniature Japan.” Hyogo Prefecture is comprised of the five former nations of Settsu, Harima, Tajima, Tamba, and Awaji, and boasts wonderful local cultures and natural features native to these five regions, including nature, industry, art, culture, history, human figures, specialty products, and food.
Most famous for its World Heritage Site designated Himeji Castle, we urge you to enjoy the uniqueness of Hyogo Prefecture’s 1,000+ castle ruins and 22 castles designated as national historic sites.

Hyogo Prefecture has nine sake brewers' associations in each of its regions and approximately 70 sake breweries and boasts the highest sake production in Japan. Due to the different climates in each region, each of the regions and breweries offer a variety of sake flavors.

Where can you drink them?
Available at sake breweries, Japanese pubs, etc. in every region of the prefecture 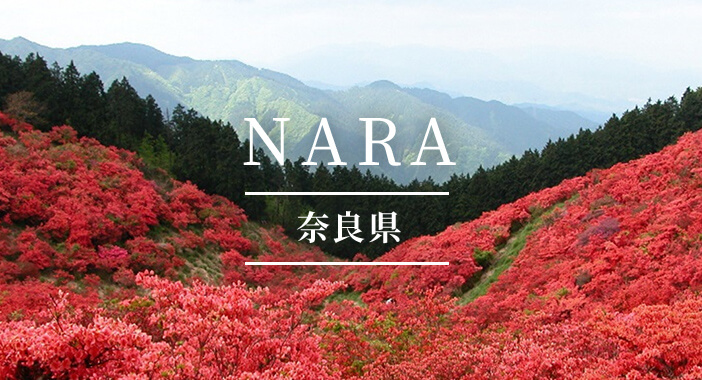 A moment of soothing in the ancient capital of Nara.

Experience Japan’s beginnings as a country in the ancient capital of Nara, a city that boasts roughly 1,300 years of history.
Nara Prefecture has three World Heritage Sites, including “Buddhist Monuments in the Horyu-ji Area,” the first recorded World Heritage Site in Japan, “Historic Monuments of Ancient Nara,” which includes Todai-ji and Yakushi-ji, and “Sacred Sites and Pilgrimage Routes in the Kii Mountain Range,” which spans the prefectures of Nara, Mie, and Wakayama. Many national treasures, important cultural properties and traditional events have been passed down through the generations and continued since ancient times.
Nara Prefecture is overflowing with a variety of attractions, with landscapes brimming with lush nature, historical ruins that feel like ancient Rome, and townscapes that harmonize modern and old.
Welcome to Nara, the origin of Japan, the perfect place to relax and soothe your body and soul.

Said to have the perfect land for brewing Japanese sake, people of Nara have been brewing sake at shrines and temples since long ago.
One of the most well-known of Nara’s sake was called “Soboshu” and was brewed in vast quantities using rice grown in lords’ manors. Even today, there are numerous sake breweries and you can enjoy a wide range of Japanese sake.

Where can you drink them?
Available in all regions of the prefecture Wakayama faces the Pacific Ocean and occupies a large slice of the Kii peninsula. The prefecture is part of the Kansai region, which includes Osaka, Nara, and Kyoto. The prefectural capital is Wakayama City and is just one hour from Osaka by train, and 45 minutes from Kansai International Airport (KIX). Inland Wakayama is dominated by the Kii mountains, home to World Heritage ancient pilgrimage routes, sacred shrines, and mountaintop temples. Along the 600-kilometre coastline, there are world-class beaches, hot spring resorts, and fantastic ocean views.

Wakayama is bursting with fruit farms, and many offer fruitpicking experiences. Pick fruit that is fresh and seasonal, including mikan mandarin oranges, peaches, grapes, strawberries and melons.
【Flavors of Wakayama】
https://visitwakayama.jp/themes/flavors-of-wakayama/ 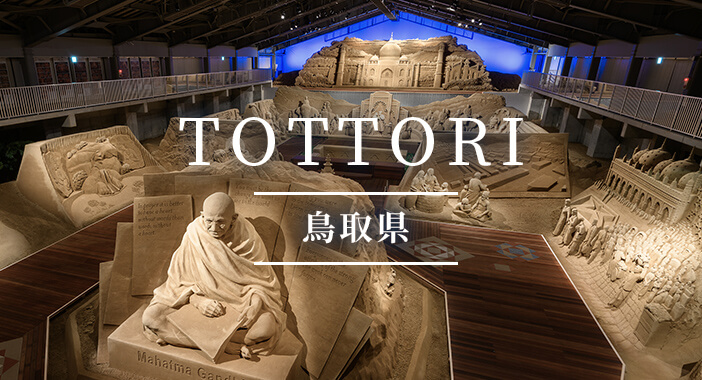 From vast dunes and great mountains to healing hot springs
Introducing the charms of Tottori.

Tottori Prefecture offers a variety of attractions such as the Global Geopark certified Sand Dunes, Kurayoshi White Wall Warehouses, and a fishing port famous in Japan as a sacred place for yokai. You can also enjoy spa luxury at Tottori’s famous onsen (hot springs), including Kaike Onsen, Hawai Onsen, Togo Onsen, and Misasa Onsen. It is also the perfect place for stargazing. If you go to the outskirts, you can see the Milky Way and shooting stars to your heart’s content.
Its cuisine is yet another reason to appreciate Tottori, with crab from its rich sea and pear and watermelon from its rich mountains.
We encourage you to visit Tottori and enjoy everything it has to offer.

Where can you eat them?
Available at Japanese pubs and restaurants throughout the prefecture Tokushima Prefecture is full of attractions, beginning with one of the world's three natural whirlpools: the Naruto Whirlpools. The western region of the prefecture is dubbed Nishi Awa, which contains the "Steep Slope Land Agricultural System," a farming technique that was designated as the first Japanese Important Agricultural Heritage System. In addition, one may enjoy marine sports and fresh seafood on the beautiful ocean of the so-called "Shikoku no Migishita," or the southeastern region of Shikoku.

Tokushima also boasts Awa indigo, which was chosen as the logo color for the Tokyo 2020 Olympic and Paralympic Games. In addition, Tokushima is known throughout the country for its traditional "Awa Odori" dance festival. The delicious sudachi citrus fruit that you can find in any kitchen in the Kansai area hails from Tokushima and is quite popular.

If you get the chance to visit, please don't miss a thing when enojoying all that Tokushima has to offer.

Pork rib meat cooked in a salty-sweet pork bone soy sauce base soup and topped with raw egg. This one is brown, but there are also white and yellow ones. Mixing this thick ramen with white rice is the winning combination.

Where can you eat them?
Available in all regions of the prefecture 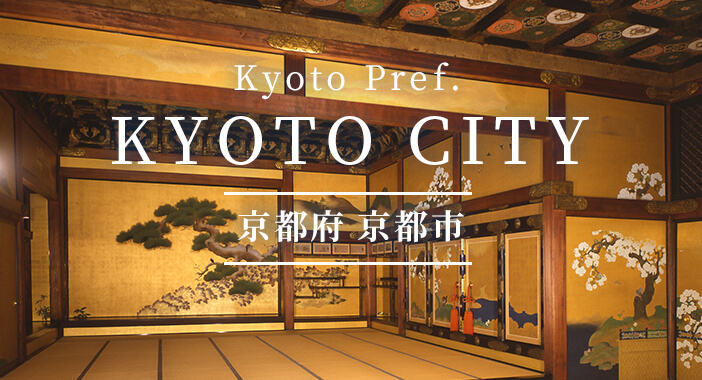 Kyoto City is located in the southern part of Kyoto Prefecture. The lifestyle cultures in this city have been nurtured for over 1,000 years, forming a unique sense of Japanese beauty. As well as Kinkaku-ji (Temple of the Golden Pavilion), Kiyomizu-dera and Fushimi Inari Taisha, Kyoto is brimming with so many fascinating attractions that are not very well known, such as Sanzen-in Temple, Fushimi, Takao, Yamashina, Nishikyo, and Keihoku. Eat, play, then eat some more!
The more you see, the more you’ll enjoy the wonderful attractions!

The stylish Kita northern downtown, with all the latest fashions and trends. Osaka's Minami southern downtown, centered around Namba. You can have totally different experiences, even in the same city

One of the must-try foods of Osaka.
Easily eaten as a snack,and bite-sized too. Sakai, the beginning of all things
Enjoy a seemingly everlasting moment in Sakai,
A city overflowing with history and culture.

The Mausoleum of Emperor Nintoku is the world’s largest tomb and part of the Mozu Tombs, which became Osaka’s first World Heritage Site in 2019. Sakai is blessed with rich historical culture, including its large number of historical temples and shrines, the old streets around Kitahatagocho, the culture of the “Way of Tea” created by Sen no Rikyu, and traditional industries such as blade-making, incense sticks, and bicycles.
The town with the Mausoleum of Emperor Nintoku and birthplace of Sen no Rikyu…
Sakai is brimming with historical and cultural attractions and is a wonderful place to visit.

In the past, numerous conger eels were caught in the waters around Sakai, and there were rows of conger eel restaurants. The gourmet and ceramic artist Kitaoji Rosanjin wrote in an essay that “the sea around Sakai is famous for delicious conger eels. They cook them well there, too…” So, we hope you decide to enjoy high-quality conger eel at Sakai.

Where can you eat them?
Available at Japanese pubs, restaurants, hotels, etc. in Sakai City Kobe, a city breathing with history
in its everyday life.

Kobe has a wealth of attractive spots, including the rich nature of Mt. Rokko and the Seto Inland Sea, harbors with beautiful scenery, exotic cityscapes, Arima Onsen, and the Nada sake brewery.
In addition, the unique lifestyle cultures of Kobe, including its food culture of sweets and bread and stylish fashion culture are nurtured on a backdrop of Kobe’s blessed topography and history as a port town.

As its reputation is so great, only Tajima cattle born within designated producers within Hyogo Prefecture that meet the strict standards may be marketed as Kobe Beef. Kobe Beef is characterized by its fine, vivid and beautiful marbling. The marbling has a melting point so low that it melts at human skin temperature, and produces a rich fragrance, mellowness, and richness.
【Kobe Official Tourism Website “Feel KOBE” Gourmet Page】
https://plus.feel-kobe.jp/en/facilities/food.html